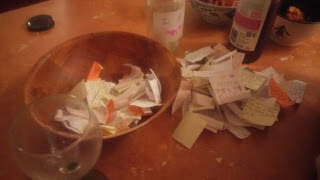 Somehow first term of the year always creeps up too quickly for my liking.  We never start any formal home learning til March (most of the heat has gone by then) but classes always start in Feb, and I'm always left feeling like they should also wait another month.  But not so.  This year I have three registered again- Gabriel for yr 11, Arden for yr 5 and Irving for pre-primary (which for us will mostly involve whatever everyone else is doing!)

Gabriel is in theory planning his year 11 largely himself...but at this instant I'm starting to feel like I might have to lock him to the computer to do his planning....there's lots of ideas about his areas of interest, but nothing put into even a vague structure as of yet.  Mostly he has spent the Summer reading.  Currently he is reading "Bulldog Drummond", since we have been watching a few film noirs this Summer also.  (Recently we have been watching the Bacall and Bogart set).

I made a plan for Arden at the end of the year, so I will review that in the week before we start our planned work at home.  I like the yr 5 Steiner themes, covering all the ancient world, and the stories that go with them.  We are hoping to head to the Maritime museum to see the Pompeii exhibit next week.  Gabriel and I have both seen it before, on a visit to Melbourne in 2009,  Willow found it creepy and doesn't want to come this time, but the rest of us are looking forward to it.

Musicianship classes will be back on in a week, and Willow and Gabriel are taking swing dancing classes (there's an excellent swing dancing scene here filled with young people from 20s through to 40ish).  Basketball will fortunately be starting when it cools down (Arden isn't keen to continue, but Gabriel loves it) but both of them are interested in doing some parkour classes, so we might try that this term.  We have been discussing tap dancing off and on over the years, as both Gabriel and Arden would like to learn broadway tap, but I haven't found anyone that offers quite what they would like.  Gabriel has decided to leave jujitsu this year, as he doesn't really love it, and for now he feels he's learnt as much self-defence as he would like.  Probably we'll be encouraging Arden to learn in a year or two.....seems pretty amazing that he's already heading towards high school years.

On that theme Willow recently turned 18, and is heading off to visit family in Adelaide for a couple of weeks.  Plus she is off to Womadelaide whilst there.  She is working on a mixture of projects this year, as she missed out on a place at WAAPA (she came home from her audition fairly certain that she would miss out).  She was a bit disappointed, but she was  pleased to get her Diploma in Classical Voice, and to have generally done well in that, and in some ways she is glad to be able to take the year out.

Fringe is upon us next week, as is the Perth Festival (which I have already purchased tickets to some shows.  We've made a list for the Fringe but have not yet sat down and discussed who will go to which shows and with whom.  Over the Summer so far, Irving, Arden and I have spent quite a bit of the Summer out and about, or hanging out at home with me doing some craft and them playing. 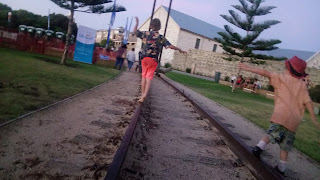 Flowers growning on a Moretan Bay Fig.  Photography by Arden. 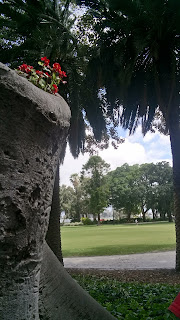 Posted by Annmarie Emerald at 7:48 PM No comments: