Just finished Arden's doll!  He has named her Honey, and she's now happily tucked into bed with him. 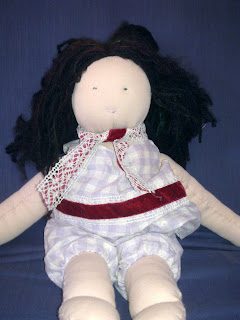 Plus I just finished my first hand-knitted dish cloth.  Tried it out this evening, feels so much nicer than using a sponge! 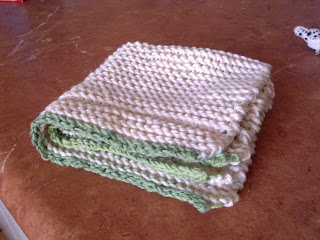 Also I made my self a soaked grain lamington cake with 'body' cream for my  birthday cake.  It's the first time in many years that I've had a lamington cake, and the raw cream in it was delicious. 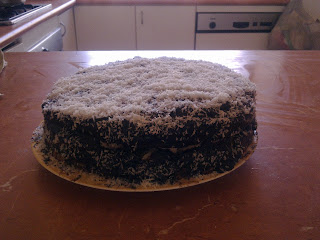 Posted by Annmarie Emerald at 5:57 AM No comments:

Books for science and other things

Picked up a couple of science books that will hopefully be helpful for this year.

The first one is a pictured guide to the elements.
http://www.bookdepository.com/Elements-Theodore-Gray/9781579128142
I reckon it would've been great when I was learning about the periodic table, to get a better sense of some of it's items.

Then there's a general science book by DK.
http://www.bookdepository.com/Help-Your-Kids-with-Science-DK-Publishing/9780756692681

Plus we've picked up a copy of Antony and Cleopatra, as part of Gabriel's Ancient Rome studies.

Finally a book to help with Willow's grammar- The Art of Styling Sentences.
Posted by Annmarie Emerald at 5:06 AM No comments:

Well since baby no 4 will be here in June, it's only a week til we start more organised schooling this time.  Fortunately I have most of our stuff sorted out, we just have to finalise details on our first block for the year.  Gabriel is starting off with Geometry and Willow is starting off with a block on Shakespeare- studying Romeo and Juliet.

We've also arranged most of our classes for the year too, though we're yet to sort out Willow's music teacher.  Everything is more or less the same as last year, except Willow will be doing jujutsu instead of basketball.  There are a few interesting one of homeschool outings too, that I'm thinking about booking us into.

Gabriel received a surprise ticket yesterday, to a Fringe show, whilst busking in the City, so I went and bought a second ticket, and he and I headed of for a show.  It was a combined performance of Classical and Jazz harp, and was very entertaining.
Posted by Annmarie Emerald at 4:59 AM No comments:

Well we've had a busy Christmas/ New Year season as expected, though not as busy as last year.  Arden turned five at the beginning of the holidays, and we had a lovely family dinner to celebrate.

The Perth Christmas pageant was on 15th December, and Willow managed to walk the whole way on stilts, which was quite a feat given that she'd only got the hang of them a couple of weeks before.  (The walk in the pageant was 6km!)  The pageant was at night this year, and I thought it was much nicer than being at a daytime pageant, where it frequently ends up being far too hot.

Damien had a couple of weeks off over Christmas, so we went on a few outings, that we'd been meaning to do for a while.  The first one was an outing to Hilarys to visit AQWA, and have a swim.  The underwater walkway, was liked by all, except the moving floor made Willow, Gabriel and Damien feel a bit ill. We also finally got to Perth Zoo (everyone loved the giraffes, zebras, and orangutans), and Damien took Willow and Gabriel out sailing on the Swan River again.

We also are celebrating Willow's 13th birthday today.  We've spent a fairly quiet day at home, but will be having an afternoon tea out at Koko Black later in the week.

I've got my homeschool stuff planned for the year, I did most of it before Christmas, and it was nice just to be able to set it aside and forget about it.  Our plan is to start in Feb this year, with some part time school, as we're expecting baby no. 4 in June.  I'm also going to do class 1 part time with Arden this year, to cover the govt requirements for pre-primary.  I'd prefer to wait til he's but given timing and how interested he is in learning to read, I feel quite ok about doing class 1 over this year and next.
Posted by Annmarie Emerald at 2:55 AM No comments: